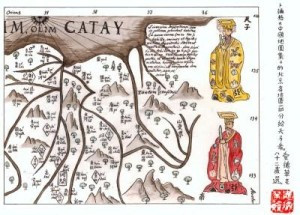 With a great pleasure we inform that our application to the program "Literature" of the Polish Ministry of Culture and National Heritage requesting financial support for a publication of a children`s book (ages 8 to 12) about Michał Boym, SI, a great Polish scientist, seventeen century jesuit and missionary to China, has been qualified to receive public support.

The aim of this publication is to introduce young readers, their parents and teachers to the person and heritage of a great Pole, seventeen century Jesuit and missionary in China, who was a pioneer in the many various fields like geography, ethnography, botany, zoology, and anthropology of culture, Father Michał Boym SI.

In view of his tremendous contribution to the European knowledge about China, he often is described as the "Polish Marco Polo". Yet, notwithstanding his great heritage, he still has remained unknown in his own country. By publishing an illustrated children`s book and its free of charge distribution in schools and among teachers we intend to spread the word among the Poles about this fascinating person, whose adventures and the scale of challenges to overcome were not less than those of the film hero, Indiana Jones.  The book was written by professor Monika Miazek-Męczyńska and its title is "How Michał from Lviv traveled to China". Illustrations for the book will be created by an award-winning artist and a Jesuit, Przemysław Wysogląd who among others was highly prized for his comics book K.O.S.T.K.A.

Publishing this book in collaboration with Sinicum - Michał Boym and SECA associations is part of this year`s program to commemorate the 360th anniversary of Boym`s death and the 100th anniversary of Poland`s independence.

The book will be published under the patronage of the Commission for Missions of the Polish Episcopate and of the Polish Ministry of Culture and National Heritage.